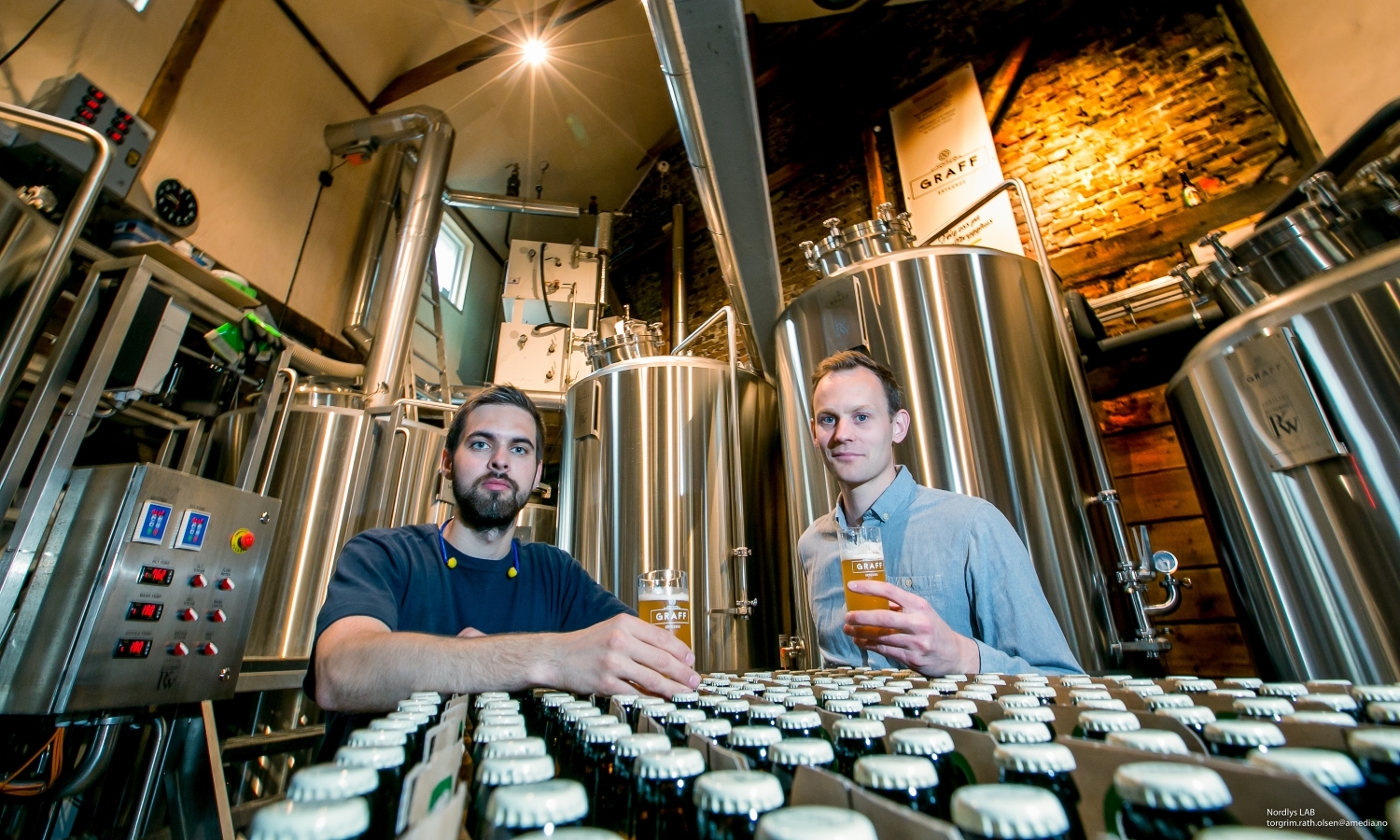 “We Had to Stop Dreaming and Make a Decision.”

Martin Amundsen (CEO) and Marius Graff (Brewmaster) established Graff Brygghus (Norwegian for “brewhouse“) in Tromsø Norway which is 1,700 km (1,000 miles) north of Oslo Norway and 350 km (200 miles) above the Arctic Circle. They chose to house their brewery in a fully renovated character building that has been in the Amundsen family for 3 generations.  After three months of renovations, the first brew through their new PKW brewery system was the well-received Portland Pale Ale.

PKW recently spoke with Martin who generously shared his and Marius’ experiences starting this Norwegian brewery and taproom above the Arctic Circle.

PKW: Where did you find the courage and inspiration to start your Norwegian brewery?

GB: Marius and I were in quite different places in life when we first met back in 2013. Marius was about to finish high school in Tromsø.  He’d already been homebrewing for a few years since the age of fifteen. I was living in Oslo with my wife and our baby daughter. A few years earlier I finished a Master’s Degree in business and finance, and now had a decent job with a bank in Oslo providing financing to large corporate clients. However, my wife and I decided we wanted to move back home, thus leaving my job in Oslo behind.

Despite our different backgrounds, Marius and I soon realized we shared a common dream about starting a craft brewery; Marius as a dedicated homebrewer, and me [Martin] with an ever-increasing fascination for the beauty of craft beer. The timing was also good with Marius finishing high school and me moving back home. This was in the fall of 2013. Together with my brother Peter, we started shaping the initial idea, turning it into a concept and, later on, a business plan. In April 2014 we flew halfway around the world to Portland Oregon, meeting what became great friends at Portland Kettle Works. This was when everything became real. Going to Portland in April 2014 is maybe one of the most important and best decisions in the history of Graff. We learned a great deal, and we got spirit and inspiration to continue our work. Summer came and went, and in the fall of 2014, we realized it was now or never. We had to stop dreaming and make a decision. After numerous considerations and a little back and forth, we decided to go for it in December 2014, and ordered our 7 bbl system from PKW. It’s our experience that the major impact of such a decision is digested over time, as you see the practical implications of your decision. The immediate effect was that we had to spend more hours and work more systematically towards the planned opening in September 2015.

On a higher level, we say that Graff is inspired by traditional craftsmanship and modern industry. We find great inspiration in this meeting between new and old.  The clean, stainless brewhouse placed in an old wooden building is a good example of that.

PKW: What was the biggest challenge in starting your Norwegian brewery and how did you overcome it?

GB: The lack of predictability over the first 12 to 18 months of business was really challenging. We felt we always ran into new problems that needed to be solved. These issues, of course, forced us to take away focus from our core activities like sales and production. The struggle sometimes makes you feel alone and there have been situations where we had to dig deep for motivation. By helping each other and solving one problem at a time, we’ve overcome all challenges so far.

GB: We seriously underestimated the importance of space and logistics. If we could start over again, a bigger, more efficient building would have been top priority. The lack of space has numerous effects:

GB: I think it’s key that we’ve been dead serious about this from day one and that we’re in this for the long run. We early established a clear goal of brewing the best beer possible, and we’ve been working towards that goal all the way. This is why we invested heavily in a stainless steel brewhouse and high-end packaging equipment, and this is why Marius spent weeks in Oregon learning how to brew as a professional. This is why every decision we make is taken in order to make us a better brewery and to enable us to produce great, tasty beers with high and consistent quality. That’s the key for everything we do in this brewery, and we strongly believe that in the long run, quality is everything.

PKW: What’s your funniest/most memorable moment at the Norwegian brewery so far?

GB: Starting Graff has taken us around the world. Our many travels to the US and continental Europe have been both educating and extremely inspirational. They also represent a great contrast to our everyday struggle in the brewery. There are a lot of memories from these trips that will follow us for the rest of our lives, whatever happens to Graff in the future, like:

On all of these trips we’ve met great people, and we’ve discovered places we otherwise never would have visited. Running a brewery has been, and is, such a door opener.

Graff Brygghus is a popular local Norwegian brewery.  Aiding the popularity, Tromsø is home to a university and Norway has a drinking age of 18 years. Additionally, with 3 months of midnight sun and 3 months of northern lights, Graff is a popular destination for thirsty tourists.